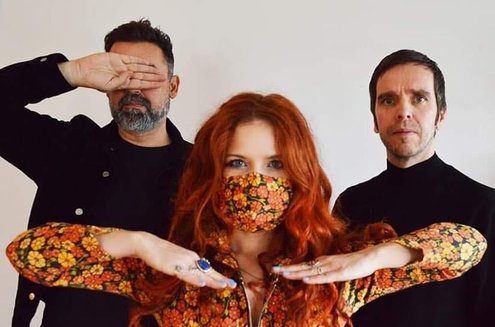 What a breakup can do for musical inspiration.

Remington super 60 is a band consisting of Christoffer Schou, Elisabeth Thorsen & Magnus Abelsen. The members have previously played in bands such as Musique Le Pop, Navigators, Frode Fivel amongst others.

Since the early start back in the end of the 90s, Remington super 60 have released albums, EP`s on various indie labels around the world, now they are ready with the follow up from last years EP “New EP” that received plenty
of attention on various blogs and radio stations around the world.

The new EP “Nouvelle Noveau” consists of 6 new songs and one forgotten song from 2002. The bands songwriter/producer Christoffer & Singer Elisabeth Thorsen were a couple of almost 16 years but decided to end their relationship last year. Some of the songs on this EP deals with exactly this.
Christoffer & Elisabeth have remained very good friends and decided to continue their musical work together, something this EP is a living proof of.

The music is mainly recorded in Christoffer`s living room surrounded by guitars, basses and a rather large collection of Casio/Yamaha keyboards from the 80s, although most people consider these keyboards to be toys Christoffer loves to include them as much as possible.

Musically the band has been labeled a “dream pop” band by media, not that strange considering the music has a big atmospheric vibe, featuring many vocal layers & big reverbs.

“Nouvelle Noveau” is released on Christoffer`s own label Cafe Superstar recordings and also released on cassette by the Slovakian indie label z-tapes.